Claire:
With a 13-hour bus ride, we’ve changed the backdrop of our tour from a temperate to a tropical climate. The sleeper bus was an experience we’d wanted to try after seeing them on our 2005 tour. In my research, I learned to expect a noisy, smoky and cramped ride of up to 24 hours. We found the bus fine (no smoking), though we would have both been a little more comfortable if we could have removed our feet along with our shoes, as everyone is required to do. (Stepping on the bus, the first thing I noticed is the smell of sour feet, but I can stand anything for a day.) The bunks shoehorn together with the feet of the  person behind tucking into an angled cubbyhole that props up the head of the person in front.

After a while, we learned to adjust our positions and use extra blankets to prop up our knees. We tossed and rolled through the curves and bumps of the night, glad to not be riding Zippy on these steep, switch-backed and largely unpaved roads. Being at the very back of the bus (not by choice), meant that some bumps launched me clear of my bunk, landing me in a completely different position than the one I’d carefully arranged. I finally started using my safety belt when, unable to sleep around midnight, I watched the bus driver pass fuel trucks on blind curves of a particularly mountainous road.

Lessons learned: Take advantage of every bush break or you’ll regret it later; Women: bring your funnel so you can stand on the roadside along with the men (ignore the curious stares), and never, EVER step anywhere you can’t see (I almost went over a ten-foot wall at the 2:00 a.m. stop and ended up covered in mud from catching myself).  Thirteen hours into the trip, we were just getting the hang of it, so you can imagine our surprise, when at 8:00 a.m., we learned we were already in Jinghong and and had to hastily offload and ready Zippy.  We didn’t expect to arrive until 7:00 p.m. and had planned to shoot a video, read, nap and enjoy the scenery. We’ll be glad to get back on Zippy tomorrow. 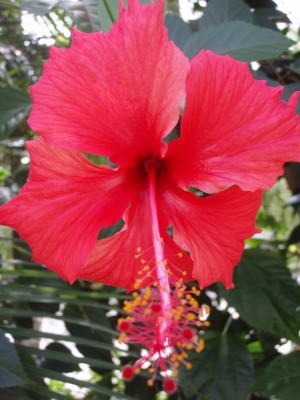 Bob:
All we had read about these long haul sleeping buses was that the experience was torture. We are both fairly small people, and that must have helped us find reasonable positions on the tiny beds. We have a motorhome with two bunk beds at the back, and they are two feet longer and a foot wider than these bus beds. The scent was not as bad as it could have been; only one man insisted on smoking, out the window he thought, while we were stopped. I would have died in the old days when smoking was allowed anytime during the trip.

The road was very rough and I am glad we didn’t have to put Zippy through that section; he’s had enough of the fist sized rocks, deep potholes and mud, thought I expect SE Asia will provide more of that.

Besides the great change in plants and weather from 2000 meters down to 550 meters, we have noticed that many of the people do not speak Chinese, and many of the signs are in another language, perhaps Bai (Thai/Lao?). We will soon find out; off tomorrow for a few days cycling in the humid hills for the border with Laos.

I like the food here. The hot is a SE Asia hot, hot but it goes away after awhile, unlike Sichuan hot which lingers. We ate at a street fandian twice today: a bowl of rice topped with any mix of at least a dozen different selections. I picked a smokey fatty hot pork and a couple of vegetables. Yum. I think the best food in Asia is found on the street, but then we never eat at high end places for foreigners; we eat what the people eat.

We sat on a stone planter with construction workers on stools or squatting, shoveling in the good stuff. We went back this evening, tried some different toppings to the rice, and a Snow Mountain beer, as we watched the rush hour of mothers hauling young school children on bicycles, recyclers on their truck/tricycles, buses and motorcycles.

Small groups played cards on short tables under the palms, settling in for a long evening of street socializing. There is no place like Asia. I think we’re going to like this part. I’ll let you know if the hills are smaller after a few days.