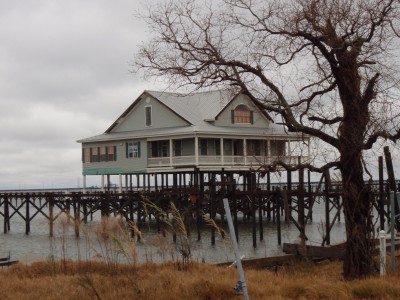 This house survived Hurricane Katrina, sort of. It is now boarded up and the stairs have been removed. Someone is, belatedly, reconsidering living over a lake, when nasty ladies like Katrina just might come for a return visit. I’ll bet the last sunset before the storm was spectacular. This is one of the better looking houses along this small North Shore road.

The last two days we have driven past some of the worst of Katrina’s work, and it is indeed sobering, more than two years later. Still, people are rebuilding, businesses are up and running again and they will celebrate Carnival in earnest this year.

A Story of WalMart and Katrina on the Mississippi Gulf Coast

We heard an interesting story from a woman in a laundromat over on the Mississippi Gulf Coast. Wal*Mart had two Super Centers within 15 miles of each other; they both were leveled. We saw them. Nothing but asphalt. Wal*Mart put up tents and opened for business within two days. The people will not forget that. There is a new Super Center up and running now, and the other grocery stores still haven’t begun to rebuild. Serve the people and they will remember.