Not that day anyway…

Claire:
Neither of us slept very well through night with our Tibetan hostesses. We were grateful for a warm, dry place but I fretted about the rain, relieved to hear it stop, only to find it had turned to snow.  The snow stopped long enough for us to get started and we knew we had another 15,000 foot pass to get over, but it was hard to tell our elevation (we don’t have an altimeter on either bike computer).

With the sky socked in and lots more climbing, we were convinced we’d reached the pass even though neither the Tibetans acknowledged it with prayer flags nor the Chinese marked it with a sign. To us it was a pass, so we took photos, made a video and descended. The snow turned wet and the road muddy and we discovered we had more climbing. This time the pass was marked, with flags in one spot and with an official sign a half kilometer away.

For cyclists who know the great 30 to 50 mph descents we have in the western U.S., these are nothing like those. The asphalt is not up to the weight of the heavy trucks and the road is full of ruts and moguls so we have to keep our speed down to 20 kilometers per hour. At one point we were bouncing so much our sleeping bag and Thermarests bounced off into the muck (they were in plastic bags). We reached the end of one long downhill and could see a long climb ahead. My knees were stiff and Bob’s neck and shoulders were worn out from controlling Zippy. Neither one of us wanted to face that climb.

Yesterday, we’d passed what looked like a roadhouse with a big Chinese flag and here at the base of the climb was another one. I walked into what I thought was a restaurant and asked about a room. Yes, they had one, it was a storeroom with two cots: $6. There was no heat, water or electricity, and the short-drop was outside. Zippy’s secure parking spot was the meat locker that was the entryway to our room. Through gestures, the proprietor made it very clear we were to keep the meat locker door closed at all times, I guess to keep the cats and any loose dogs out.

We tried to regain some heat by curling up in bed for a while, then ventured out for dinner. That’s when we finally figured out all the people coming in were road workers; we were staying at a road maintenance camp. We ate what everyone else ate, a big comforting bowl of noodles and sat around the kitchen stove to warm up. I don’t know that it was really so cold, but we were still so chilled that we went to bed huddled together with Lucky in one twin cot with four fluffy comforters on top of us. We slept well in the very cold room; there’s a reason they store the meat there. 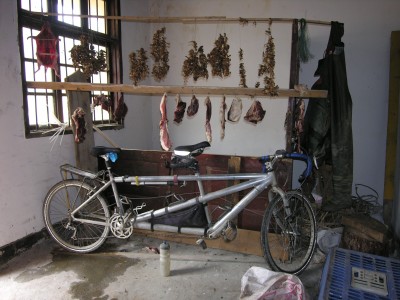 Zippy in the meat locker