Mount Isa, June 16. 125k yesterday, tailwind and 1,100 meters of climbing. Claire saw a dead kangaroo, nothing special, but then, “ohhhhh, there’s little legs sticking out of her pouch, a Joey!” We later learned that many Joey’s survive crashes and are often raised by Australians as pets, and sometimes successfully released into the wild. Further along, a wedge tail eagle attended to his dead mate along the highway. The road carnage here is amazing, but a sign of how many critters are out there to be crossing the road to get killed.

In Cloncurry, we met Gary: 55 he left his business with a son and took to the road two and a half months ago in Sydney. He is divorced and searching. He is a strong recumbent rider, but worried about the next six days westbound. He is yet to bush camp. I think he wants us to come along with him. If we can’t do the Plenty Highway we might do it, though we prefer being on our own. We had tea (supper) with him last night and learned a lot about Oz culture. He’s good company and rides our speed.

The Urandangi Cutoff and the Plenty Highway

This section of the trip is a bit like cycling more than the width of Oregon on a un-maintained US Forest Service road, with but four stops for minimal service. As the Aussies might say: bit of a bash mate . 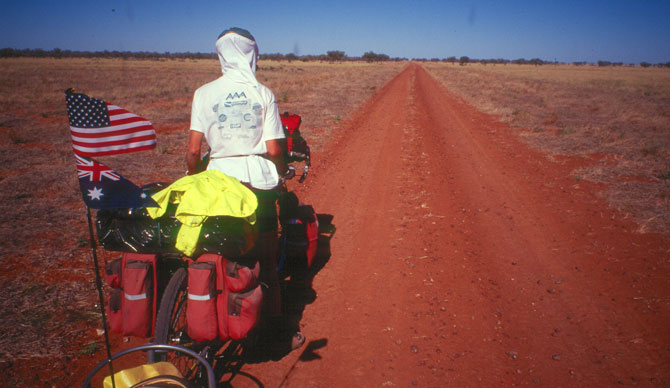 We left Mount Isa June 18 in the opposite direction as Gary. The Mount Isa Police had admonished that the track we intended to attempt was, “..a goat track. Don’t do it.” We were disappointed, but decided to try one last thing; we called two stations (ranches) along the route and were told conditions were pretty good for this time of year. Taking into account (not enough) that they were looking at the roads from a 4wd ute perspective, we decided to have a go. After a frenzied afternoon of shopping for two weeks worth of compact food, mailing part of it ahead to the Jervois Homestead station, loading up with 20 liters of water and lots of food, we headed south on Sunday morning, very, very excited and not a little apprehensive of what lay ahead. What did lay ahead had all the elements of adventure, a life affirming joyous enterprise of the highest order; the kind of venture that makes the moments shine in memory for a lifetime: 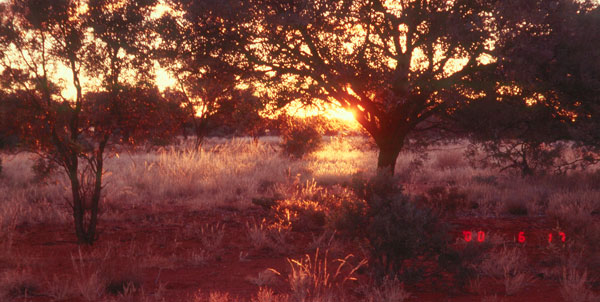 You have ridden your bicycle 400 kilometers (248 miles) on a challenging red dirt track, halfway to nowhere, from nowhere, to where the sky never ends. You are 400k in all directions from any significant light source, any significant grouping of humans, in the middle of a 500 mile diameter circle of quiet, and as evening settles, with it a darkness, utter darkness, like you have never known before. The rose and purple of the desert twilight has gone, moon rise is over an hour away, it is the shortest day, longest night of the year and you are alone with your thoughts, and the dome of sky, the sweet scent of desert flowers and a silence you have never known. The southern cross rides high, and your old friend the big dipper barely kisses the northern horizon, your pole star far below the horizon. You turn a complete circle, slowly, reverently, and the star dome goes into the curve of the earth as you turn. The milky-way is an intense swath of fog light above, enough to light your feet as you slowly walk in the rapidly cooling air.

This is what you have come for. You are in one of the ten darkest places on earth, and you got here by the power in your legs, arms, shoulders, and the ingenuity and perseverance of your mind. And the love of life in your soul.

An alto chorus of dingos sings from under the southern cross, signaling it is time and you reluctantly turn to your tent, warm sleeping bag, and, not so reluctantly for us, to each others warmth to carry us through, in comfort, the long winter solstice night. This is the original cathedral, and you have just experienced one of the most significant worship events of your life. By whatever name you call upon the originator of the universe, you have worshiped, and perhaps, wordlessly, understood the why.

And perhaps you understand why we do these journeys…

Nearly run down by an emu…
On our first day out from Mount Isa, we saw our second emu of the day, and of the trip, and almost had a collision with it.

Silly bugger saw us, began running along beside us instead of into the bush; then he suddenly, unexpectedly, turned in front of us. Talk about a close up look at a big bird. He passed less than two meters in front of us, we were doing around 25kph at the time, claws scratching at the road, neck stretched out long, in a desperate attempt to gain speed. Just missed us; of course I didn’t bother to slow down, I was enjoying the sight too much. A collision would not have been pleasant, but we missed him, or she missed us.