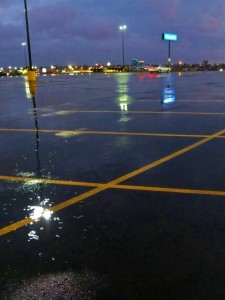 We knew severe weather was on the way and parked turtle into the wind; 90 degrees to the wall of black looming in the west. The severe thunderstorm warning predicted 70 mph wind gusts. We’ve experienced 60 mph once in Turtle and she rocks severely if parked beam-on.

We went into the WalMart, thinking we had time to pick up a few things for dinner before the storm hit. Wrong. We were just about to head for check out, when we noticed the usual random pattern of shoppers movements had suddenly turned to a purposeful unidirectional flow. A clerk nearby said, “Move to the back of the store please. There has been a siren.”

In Joplin, Missouri, no one ignores a siren. A siren means one thing, tornado, or at least very very severe thunderstorms capable of producing a tornado. The center of town was nearly destroyed a year ago. People obey sirens.

Shoppers and staff move slowly to the receiving area, nominally protected by concrete block walls. We are quiet, the employees efficient, purposeful, calm.We stand looking at each other, and the roof girders as heavy rain pounds above. People clutch cell phones, some broadcast their own message to family: “Get yourself to shelter. Now!”

A young woman presses her phone to her ear, other hand covers her other ear. Tears gather, run down her cheeks. She is a cosmetologist from the beauty parlor. My guess is she had been working in the WalMart a year before, where many were trapped, several died. The pad where the destroyed store stood lays barren, just in front of the new store, mute reminder to all who pass it.

A woman pats her husband’s shoulder repeatedly, speaks encouragements into his ear. He is vulnerable, in a electric shopping cart, oxygen canula in his nostrils, face blanched; frustrated by his smartphone, looking for the weather radar.

A few soft sobs provide a background to quiet talk. The prayers are silent. Everyone is patient. This will pass. Hopefully.

And it did pass. This time.

Joplin is still traumatized. Some will never get over it. Each long tornado season will hold dread; each thunderstorm vivid memories of chaos.

As for us, we felt calm. Our travels have taught us that worry is useless; once you have done what you can, relax, focus, and you are prepared to act. But then, we’ve never been through a tornado.

(For a great story about staying focused amid the chaos of the 2011 tornado, read this Wall Street Journalstory.) 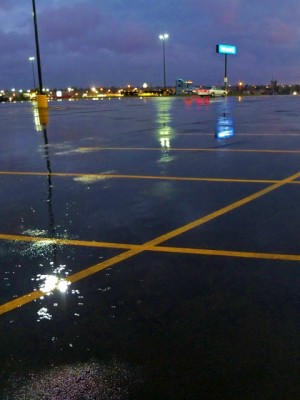 Store staff announced the all clear and returned quickly to their stations. People rushed for the checkouts and then into the now light rain. They were going home to check for damage; winds had been clocked at 80 mph. We got a look at Turtle, still standing. Relief. When we returned our skylight had been sucked open by the ferocity of the wind and the bed was damp, but otherwise we were fine. We had parked the right direction. Claire was disappointed we missed the excitement inside Turtle; and she’s the one who gets sea-sick.

(The next day at the farmer’s market a vendor told us their greenhouse was damaged and their garage door collapsed into the garage.)