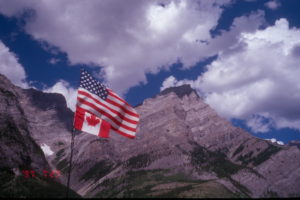 Discovering our neighbors: 13,000 kilometers one pedal stroke at a time

The American flag flying above the Canadian flag on our tandem is not a sign of disrespect. It follows common international flagging conventions for small vessels; so visitors can be easily identified. If you read on you will see I am a great fan of your Canada.

Claire and Bob Rogers rode their tandem 14,000 miles around the U.S. for over a year; they returned home intending to return to normal life. An opportunity to tour British Columbia changed all that and led to three summer tours across Canada totaling 13,000 kilometers and anchored them in the New Bohemian lifestyle.

My wife, Claire and I lived for a decade in a house on the Strait of Juan de Fuca, north of Sequim, Washington, and within sight of British Columbia, Canada. We soon came to depend on the excellent Canadian Broadcasting Corporation radio stations in Victoria and Vancouver for most our news and music. We began to have some understanding of the Canadian system of government, and to take an interest in Canadian culture.

I became fascinated by Canadian’s perceptions of America, our dominant (sometimes domineering) culture and politics. I wondered what the average Canadian really thought about America, and Americans, and just how alike, or different, our two peoples are.

There is something about border country that fascinates. Two groups of people separated by a simple line on a map, usually little more, are different somehow. Sometimes the differences are great, religious or racial, and the people have great enmity, for each other, and even tend to war. Between other countries, minor differences get lost in the similarities; family ties, friendships and business associations developed and deepen over time. So it is with Canada and the United States. Canada really is our best friend in the world, and because of that, we sometimes forget she is a sovereign country. Too often we treat her like a little sister; she’s cute, but not big enough to invite to our important parties.

Our shared map-line is the longest un-defended border in the world; in some ways it is as insubstantial as a puff in the wind. I once paddled a sea kayak the 20 miles from Dungeness Bay, near our home, to Victoria across the Strait of Juan de Fuca. I waited with my kayak, dehydrated and exhausted, to board the Coho to return. Suddenly realized that I had not checked in with Canada customs. I had been in Canada illegally for nearly two hours. In a panic, I found the nearest customs officer and explained what I’d done. He looked at me, then my little kayak, shook his head, “You paddled that thing from the States?” I sheepishly nodded. “And didn’t go to customs?” He frowned. Gulp. “You forgot.” I nodded. He shook his head again, but smiled this time. “I believe you.” He motioned for me to carry my kayak into the ship’s hold. “Our little secret,” he touched a finger to his lips. “Don’t do it again,” he cautioned. This small event between people, negotiating the everyday work of countries between us, has always made me feel warm toward Canadians. He certainly bent the rules for me, willing to let his personal judgment overrule procedures. That he felt comfortable doing that says something very positive about his culture and his government.

Claire and I also have very special shared feelings for Canada. We honeymooned in a kayak among the Broken Group of islands off the west coast of Vancouver Island. Since then, we have made a number of day visits to Victoria to bicycle and consume large quantities of decadent pastries, and periodic shopping trips. We wanted to see more, and have the time to really meet Canadians, maybe find out what makes our two countries, our peoples, have such an important, if sometimes uneasy, friendship.

Canadians don’t appreciate being thought of as Americans who happened to make a political mistake a long time ago, when they stayed with the British Monarchy. They are different, and like us, they have many internal cultural and political differences. One of their internal differences, the question of Quebec separatism, threatens to tear the nation apart, has already done so to a degree. (written in 1997)

Besides the cultural curiosity, we knew Canada to be a large and beautiful country, and we wanted to see it. We’d returned home just a year before from a 13 month journey around the US, following the seasons on our tandem. We were chafing at the strictures of normal life, and looking for an excuse for another adventure. This journey was to be the beginning of a deep Canadian immersion. I began in June of 1997 with a loop of BC and part of Alberta, and extending eastward across the nation over three summers.

Our preferred mode of travel, tandem bicycle, is much slower than motor vehicle, but has advantages: we get strong legs, strong hearts and lungs, and nice tans. And, Zippy is a wonderful ice-breaker. We bicycle, not to set distance or speed records, not to show how tough we are or get attention from the press. We bicycle because it is perhaps the best way, for us, to experience any geography, and any particular people. It is not a stunt. We simply love to bicycle, like some people love to drive sports cars, others limousines; some drink beer, and others fine wine; it’s a personal choice.

The bicycle touring in this narrative is muted; no daily near death adventures, no heroic physical feats; the hills are not all the steepest in the world, the days are not the hottest, the nights are not all frigid and miserable. We don’t challenge life with bravado, we embrace it, share it, love it. And, we keep our days short in kilometers, the better to smell the flowers and hear the people.

Zippy does insist on appearing now and then, after all, he owns our muscles for long periods of each day; he is the one who attracts new friends for us. He is more than a bicycle to us, he’s a member of our family, our precocious teenager, and we love him like any proud parent.

Oh, and one more thing. Against all preconceptions of marriage, Claire and I actually enjoy being together all day, every day, and all night in our little tent. We are best friends. Our tandem keeps us close, to talk about what we pass through, who we meet, and what it all means. I am listed as the author of these travels, but I would not have made them without my life-companion, my lover, my wife, Claire. We are co-authors of our lives, and we hope you enjoy sharing this part of it.