To give you an idea about the misplaced bravado that marked the first years of the U.S. military in Southeast Asia, Life Magazine quoted General Westmorland about the prospects for the war: “We’re going to out-guerrilla the guerrilla and out-ambush the ambush. And we’re going to learn better than he ever did because we’re smarter, we have greater mobility and firepower, we have more endurance and more to fight for… And we’ve got more guts.”  Either this was all bluster, or he was severely out of touch with the realities before him. In later years, other high ranking military officers indicated they felt Westmoreland’s strategy was wrong. But of course they did not speak out at the time, as criticism of a superior just isn’t done. Westmorland was trying to re-fight World War II using similar search-and-destroy strategies, with new equipment, greater firepower, and short-term conscripts. The North Vietnamese and the Viet Kong weren’t in Europe, or North Africa and they had no intention of playing by his rules. They didn’t read the same book. When the North got intelligence about Westmoreland’s massive sweeps, from friendly villagers who’d probably been bombed and didn’t like us, they simply melted away into the jungle, the villages, or crossed into Laos or Cambodia, to wait for a better opportunity.

Westmoreland, Abrams and Petraeus: Attitudes about war and the central  place of the civilian population on the battlefield and at home

The Pentagon Papers, leaked by Daniel Ellsberg in June of 1971 was pivotal in turning American public opinion decisively against the war; the politicians are never far behind. The report, ordered by Secretary of Defense Robert McNamara, showed the confusion and poor leadership of the early years of the war, but stopped short of the mentioning the changes brought about by Abrams and Ambassador Ellsworth Bunker after TET 1968. Soon after the release, President Johnson began increasing pressure to ramp down the war, by withdrawing troops and cutting support for the South.

The Abrams Strategy in Vietnam

General Creighton Abrams was appointed as deputy to Westmoreland in May of 1967 with the understanding he would shortly replace Westmoreland. Politics intervened and it was not until June of 1968 when he assumed command of the armed forces in Southeast Asia. Abrams, with full support from Ambassador Bunker, turned his war efforts from the search-and-destroy tactics of Westmoreland to protecting the villagers, and Saigon from rocket and ground attacks from the North and the Viet Cong. He understood that most people just want  peace, and if his troops and the South Vietnam Army could provide that, he could win them over.

While Westmoreland was chasing ghosts in the jungle highlands, the North and the VC were launching rockets nearly daily into heavily populated Saigon. While Claire’s mother DeLee was pregnant with her in Saigon, she was traumatized by a nearby explosion; that’s how close Claire was to this war. If people could not feel safe in Saigon, they must have felt there was little reason to support the Americans. 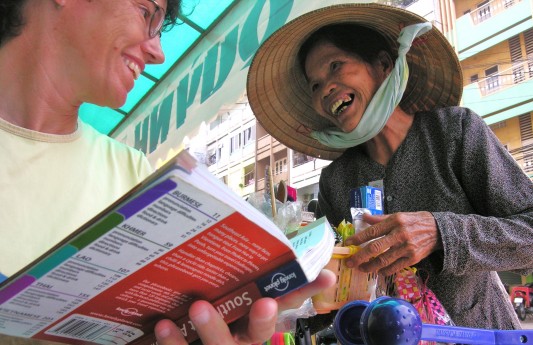 Claire Returns to Her Birthplace, Saigon

Abrams broke his troops into small units that were to protect villages, and train ARVN soldiers to take over when they left. This sense of safety paid great dividends. As we brought our troops home and the war wound down the people, particularly in the Mekong Delta and Saigon, so turned against the Viet Cong that they essentially ceased to be a factor. Many dropped their weapons and went “chieu hoi” or changed sides and went home. They would pay a price later in “reeducation” camps.

Chieu Hoi; Listening to the Locals 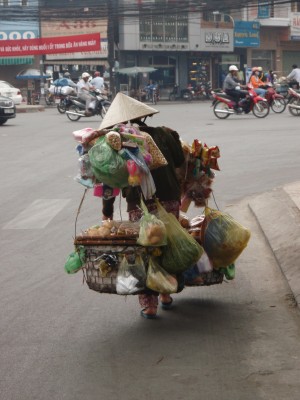 Despite disproportionately heavy losses in their TET offensive of 1968, North Vietnam refused to quit, and began building for another effort in the next dry season. Abrams number two objective, after pacification, was: cut the Hoh Chi Minh Trail in Laos. B52s had been pounding the trail from the Plain of Jars to the south of Laos near Tchepone, but Abrams wanted more: “He wants that Ho Chi Minh trail in such a shape that a crow has to carry his rations to fly over it.” Seventh Air Force commander General Lucius Clay, describing the interdiction (bombing) campaign. Abrams decided to take the offensive, using ARVN troops to cross the border, forbidden to U.S. ground troops in rules of engagement. The offensive was named Lam Son 719 discussed in the previous post. Again politics, South Vietnamese this time, intervened and snatched victory from the South and Abrams. 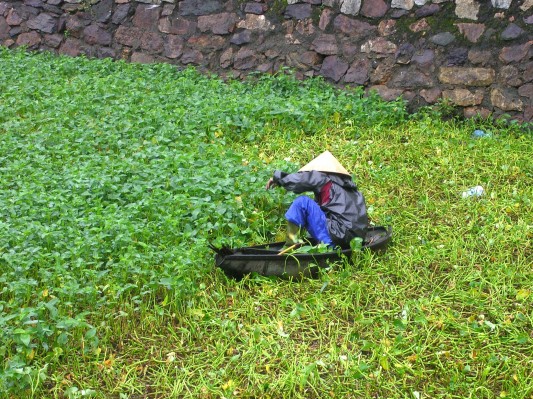 Harvesting our lunch vegetables from the moat in old Hue

Abrams was a patriot, and though he thought the war could be won, dutifully did the best he could with the troops left to him, bringing ARVN closer to being an effective army, and making it difficult, but not impossible, for the North to get troops and material in place for each new dry season attack.

Abrams was a warrior, and believed in pushing an opponent relentlessly, but there was another side of the man and his strategy. He hated to see people dying for no reason. Allowing rocket attacks on Saigon had to stop. Westmoreland had little interest in stopping the attacks, and at any rate could not, or would not, spare troops from his central search-and-destroy sweeps.

For the most part Abrams respected the army of the North, though the massacre of 3,000 civilians in Hue by the North during the 1968 TET offensive, would remain unfathomable to him. He worried about the South Vietnamese people, and felt protecting them, giving them enough security for them to go about their daily lives, was central. During his time of leadership, he succeeded in protecting most of the villages, and but failed to cut the Hoh Chi Minh Trail  It was just too dense with jungle, and the enemy too determined. 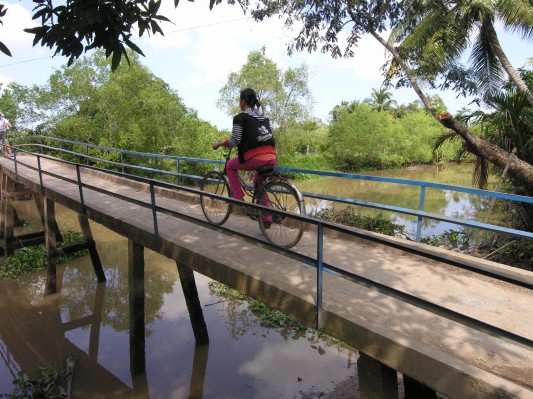 Shock and Awe: Westmorland Would Have Loved It

Abrams represented change in military thinking that has carried over, belatedly again, into the contemporary Iraq and Afghanistan wars. But not in the beginning. Shock and Awe was the order of the day at first in Iraq; search and destroy with armor and airpower won the day to Baghdad. Of course the enemy waited and watched, and invented the roadside bomb. General David Petraeus was brought in when old techniques were found lacking. He had read the Book of Abrams, and paid attention.

In Mosul, as leader of the 101st Air Assault Division, Petraeus, began immediately to use methods to build security and stability. He worked to rebuild the economy, local security forces, held elections for the city council and began the rebuilding process for public works. Petraeus learned his nation-building during previous tours in Bosnia and Haiti. He saw nation-building as a central military mission.

Petraeus was named Commanding General of the Multi-National Forces in Iraq January 26, 2007 and held that position to September 16, 2008. His common sense leadership, championed the much debated surge, worked to rebuild local security forces, and he continued the protect-the-villagers strategy of Abrams.

As American involvement in Iraq wound down, as promised by candidate Obama, President Obama asked General Petraeus to take command of the International Security Assistance Force in Afghanistan. Petraeus was once again asked, as Abrams had been, to step into a war mishandled by others, make do with less, and win the unwinable. As with his approach in Iraq, and Abrams before him, he refocused in Afghanistan on bringing a sense of stability to the contryside. He hasn’t always succeeded. The records of Taliban activity are classified and some would like them leaked. Daniel Ellsberg believes they would show an increase after the troop surge in Afghanistan. It may be years before those figures are released, unless WikiLeaks finds the documents.

One other thing Petraeus and Abrams shared was a rock solid sense of ethics. Those who serve under him, and those who hired him, Congress and two presidents, believe what he says. He understands that war is won or lost in the hearts and minds of the people, both at home in America, and in this case, Afghanistan. Like Abrams, he hates to see people die unnecessarily: “We must never forget that the center of gravity in this struggle is the Afghan people; it is they who will ultimately determine the(ir) future…”  A NATO helicopter air strike killed nine Afghan boys and wounded two others in Eastern Afghanistan. Petraeus said, “We are deeply sorry for this tragedy and apologize to the members of the Afghan government, the people of Afghanistan and, most importantly, the surviving family members of those killed by our actions. “These deaths should have never happened.” Petraeus is not a “mistakes happen” kind of person. He understands that as top commander, the buck stops at his desk. It is a way of standing tall that crosses cultural and religious boundaries anywhere in the world.

My intent was not to just praise two men, Abrams and Petraeus, or damn one, Westmoreland, to praise or damn any war, but to look inward at my own attitudes and try to understand the war that wasn’t mine. I am encouraged that at least one lesson was learned, and passed on, from Vietnam.

I believe war seldom solves problems, and often creates more than it solves, but these leaders showed the complex nature of war and those who fight them. In the beginning it is the politicians who start wars, sometimes for good reasons and with clear objectives. Too often they start wars to gain political capital, and too often without a clear objective. No matter, the Abrams and Petraeus, the soldiers of our military, are bound to carry out those civilian orders, no matter their opaqueness, or downright stupidity.

The lack of a clear objective in Vietnam led to an ignoble end, death, sometimes a lifetime of hurt, for many of my generation. Abrams did his best, but it came too late for Vietnam.

In the beginning of the Afghanistan war, the objective was clear, find the terrorists who struck on 9/11. Unfortunately the politicians sent the troops to Iraq instead, and Afghanistan slipped away. Petraeus got his Afghanistan surge, and it is bringing a better sense of security to at least some villages. But, it may be too late. Americans have turned away from Afghanistan, toward their own financial problems, and the politicians are ending involvement. Maybe this is how wars go now. Maybe this is how wars have always gone. Someday the politicians, and we the people, will learn from Petraeus, and Abrams that wars are won by winning the hearts of the people most affected.

Maybe someday we will will learn how to solve our differences without war.