He sauntered down the stairs out into the street and with a dour look, made his pronouncement over Zippy, punctuated with a shake of his head. He was a Crocodile Dundee look-alike, hat and all. “There’s tracks out in the Kimberly where the clay’ll sink you a foot.” Dramatic pause. “You’ll never make it.” Just what we wanted to hear of course. But then we had heard they’ve had the worst wet season in years all across the north of Australia, complete with three cyclones, one of them a basher. We don’t know yet how the tracks have suffered, but suspect they have taken a big hit. Our route will depend on whether the road grader crews in the outback shires have graded our planned tracks yet. We will probably depend on locals as we get close to leaving the bitumen (bit’-chu-men or pavement).

“But, the wet is over now, and we’re headed into the dry season” I countered.

“Don’t believe all you see on the telly, mate. It won’t be dry ’till December.” There I knew he was putting us on. We’ve carefully researched, and locals have confirmed, that the dry has arrived, if a bit overdue. “We’ll remember you.” I said. “No you won’t.” And he walked slowly away from us. I suspected we had just been treated to a certain class of Aussie humor. We’ll be prepared for it next time!

We were met at the Cairns International Airport by Lenore and Stan Evans, local bicyclists, bicycle advocates, who took us to their home to have a place to put Zippy together. Also along for the ride was grandson Jamie, and at their home we were met by Tyson and Oskar, energetic, playful dogs. Lenore has her walls pinned full of engineering drawings of local road projects. Her passion is to keep the civil engineers feet to the fire as far as cycling facilities go. I believe she’s a bit of a pit bull on the subject and the cycling community owe them both a great deal. 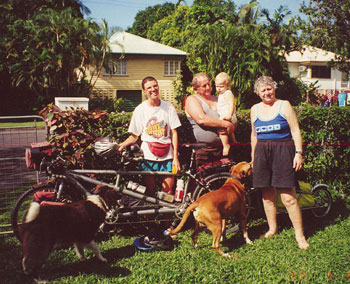 Stan is a former member of the elite Aussie version of our Navy Seals. Massive shoulders and hands, he’s a good friend to have anywhere. Stan even has some experience “taking” crocodiles, and shared his safety suggestions with us: “You just reach your hand down his throat, grab his tail and turn him inside out.” Right Stan. 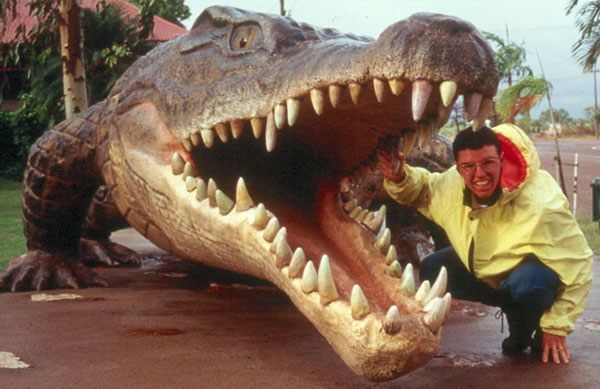 They grow them big in Queensland

He did have some good points for us to remember; how far to stay away from the stream bank if crock infested, or we don’t know… There have been several sightings of crocks in the creeks of Cairns recently, population 120,000. They tend to like to get out of the water and sun themselves this time of year. Perhaps we will be lucky and see one…from a distance. Lenore and Stan gave us afternoon tea; fish and chips from a local chip shop, vegetables, watercress, pickled beets, onions, pickles and toast and vegemite. Vegemite is that special sort of yeast and salt mixture the Ozzies love so much, and the rest of the human race can’t seem to appreciate. However, I love it! Claire is not there yet. I already bought a jar for the journey.

Riding on the left side of the road is more of a challenge than I remember it being in Kenya 13 years ago. And here they have round-abouts everywhere, a bit of a challenge for an American, but I am beginning to like them better than traffic lights. We are, after several days in Cairns, finally beginning to look right before stepping off curbs.

I am however convinced that my internal compass is all screwed up by being in the Southern Hemisphere. Stan took me to some bike shops the first day to get a replacement tube, and every time I was sure I knew we were headed a certain direction, say north, the truth was exactly 180 degrees opposite. It is just now beginning to get a bit better, but for a long time I will have to refer to a compass.

Thankfully compasses really do still point north, though I have no idea what the declination is; will have to find out.

It is winter here, at a very tropical 16 degrees below the equator, and the sun seems lower in the sky than I expected. Actually they don’t call it winter, they call it the dry season, or more likely just, the dry. Their summer is called the wet, after the constant monsoon rains that make it such a biologically rich part of the world. We have planned our trip to follow the dry season all the way around Australia: we will be in the north (the hottest part) during their dry and cool season, and in the south (the cooler part) during their dry hot season. We will travel in an anti-clockwise direction, just the opposite of our route around the United States (1995-96, 14,000miles) in the northern hemisphere.

The sun seems to be coming up and going down in the wrong place. It scribes a steep parabola from NE to NW and just looks very strange. Sunset is fairly early and our days are shorter than expected; they actually never vary much throughout the year. I have seen the Southern Cross a couple of times; at night at least, I know how to find south.

We are adapting to the humidity and enjoying the benefits of tropical climate: strong scents of flowers and ripening fruits on the air, warm fuzzy nights, cooled for us by a ceiling fan. Soon we will be leaving the coastal climate, climbing over the coast range into the Atherton Tablelands, fruit basket of the north, and into the dryer outback of long straight tracks, deep blue skies and unspeakable distance.